A Brief History of Sharksploitation

Yesterday’s episode of Sounds of Cinema featured a review of The Meg, the big budget killer shark film adapted from the novel by Steve Alten. The Meg is bad but not in a way that is any fun and that makes it a disappointing exception in the killer shark film genre. This niche of movies is quite prolific and it has generated a lot of titles that achieve a sublime schlockiness that is undeniably entertaining.

Jaws remains the de facto shark film. This movie wasn’t entirely original—monster movies had long been a staple of Hollywood—but Jaws was executed in a way that elevated the material into a perfect combination of populist entertainment and cinematic craft. But Jaws was—at its heart—the kind of monster picture that would have played at a drive-in a few decades ago and one of the attractions of monster movies in general and the killer shark genre in particular is their unapologetically low brow thrills. The iconic Jaws poster art captured this appeal. 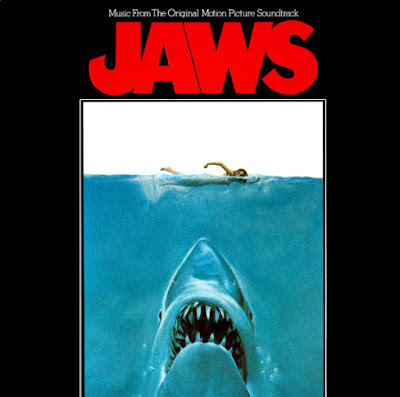 Jaws ushered in a wave of killer shark movies such as Up from the Depths, Devil Fish, and Tintorera as well as other animal attack pictures like Grizzly and Orca. The 1981 Italian film Great White [also known as The Last Shark] followed the formula a little too closely. The picture was so similar to Jaws that Universal successfully sued to keep it out of US theaters.  The shark movie genre has never really gotten past Jaws and films as diverse as Open Water and Deep Blue Sea and Shark Tale continue making deliberate references to it.

The Jaws series quickly descended into studio financed versions of the low budget sharksploitation churned out by independent filmmakers. Following the respectable Jaws 2, Universal embraced the B-movie nature of the genre with 1983’s Jaws 3-D. A reworking of Revenge of the Creature, the film plays like a comic book version of a shark movie as a giant great white goes on a rampage inside of a fantastical reimagining of Sea World. Jaws 3-D was released just as stereoscopy was going through a resurgence (one that would end shortly after the movie’s release). The 3-D format required a particular lighting and photography style and this combined with the sci-fi-like setting, the odd special effects, cornball dialogue, and the colorful 1980s production design resulted in a motion picture that is one of the most satisfying pieces of killer shark shlock.

Most of the shark films released from the late 1970s through the 80s were low budget affairs that tried to replicate the Jaws formula. Like the 1975 film, these stories revolved around a large man-eating shark that arrives at a tourist destination just in time for the resort’s grand opening. The hero is usually a blue collar type who fights the shark as well as a corrupt politician or business owner who is willing to put people in harm’s way for the sake of dollars. The films typically conclude with a fishing expedition in which the shark is spectacularly destroyed.

The Jaws formula triangulates conflicts between the individual, nature and society. These stories are primarily about our primal fears but secondarily about social anxieties. In these pictures, mankind engages in a struggle to survive with one of nature’s greatest predators but the protagonist also participates in a moral contest with the community. The endings of these films tentatively reaffirm man’s dominion over the earth while also questioning civilization’s priorities.

Other shark movies made at this time deviated from the Jaws formula. One of the popular alternative approaches combined shark action with crime stories and undersea treasure hunts such as 1975’s Shark’s Treasure and 1979’s The Shark Hunter and 1988’s Night of the Sharks. These films strayed from the primal thrills of the Jaws-formula with scenarios that were cynical and often brutal. One of the unfortunate qualities of these films was the routine killing of actual sharks. Many animals, especially tiger sharks, were often abused by the production and killed on camera.

After 1987’s Jaws the Revenge ended Universal’s high profile killer shark series the genre faded out until the late 1990s. One of the major titles kicking off this new wave was 1999’s Shark Attack. This film and its contemporaries adhered to the Jaws formula but instead of relying upon clumsy mechanical sharks or enlisting real ones to be killed on camera, the movies of the Shark Attack-era used documentary footage (even if it didn’t necessarily fit into the continuity of the action). Shark Attack heralded a new era of killer shark movies that included Red Water and Blue Demon and Shark Zone as well as sequels to Shark Attack.

In between the post-Jaws fad and the debut of Shark Attack, the Discovery Channel had massive success with its annual Shark Week programming. There was always a tension in Shark Week between the Discovery Channel’s stated goal of providing educational programming and commercial-driven sensationalism. This played out in Shark Week’s mixed messages as fear mongering shark attack documentaries were intercut with calls for shark conservation. Over three decades, Discovery’s Shark Week programming has gradually gotten dumber and in recent years the channel has become one of the biggest purveyors of shark shlock. In 2013 and 2014 the channel featured pseudo-documentaries that deliberately misled the audience. While Discovery has since reigned in the fictionalizations, the link between Shark Week and sharksploitation films is evident in the cross promotion with features like The Shallows and The Meg.

The era of shark films that started with Shark Attack were also distinguished by a particular focus on the Carcharocles megalodon, an ancestor of the great white shark that was the size of a city bus. An entire subgenre of shark movies about the megalodon has emerged including 2001’s Shark Hunter and 2002’s Megalodon and 2018’s The Meg. Probably the most popular megaladon film among killer shark aficionados is 2003’s Shark Attack 3: Megalodon. The movie is such an extraordinary cinematic train wreck that it has to be seen by lovers of shlock cinema. (And it is far more entertaining than The Meg.)

The megalodon films were made possible by advancements in digital technology that made giant sharks accessible to low budget filmmakers. These digital tools were seized upon by The Asylum, an independent production company whose films frequently play on the SyFy Channel. The Asylum styled itself as Roger Corman’s American International Pictures for the digital age with throwbacks to the drive-in B pictures of an earlier era. Sharks are the cornerstone of Asylum’s oeuvre. The company’s output shifted the sharksplotation genre into a new phase with deliberately silly titles like Mega-Shark Versus Giant Octopus, 2-Headed Shark Attack, and Planet of the Sharks. But The Asylum’s greatest success was the Sharknado series. With six installments in all, Sharknado is one of the unlikeliest cinematic successes of this decade. The first film was released in 2013 and became a sensation. It premiered on the SyFy Channel but Sharknado was given some limited theatrical showings that played to sold out crowds. A sequel followed every year since with D-list celebrities vying for cameo appearances. (Donald Trump angled to play the President of the United States in 2015’s Sharknado 3 but when that fell through he had to settle for being the actual President.)

The past three years have seen sharks return to theaters. 2016’s The Shallows, 2017’s 47 Meters Down, and 2018’s The Meg were well received by audiences. The movies befitted from high production values, competent filmmakers, and a strong cast but they were also rooted in the primal thrills of classic sharksploitation.

Given the ratings bonanza of the Sharknado series and the box office success of The Meg it is unlikely that sharksploitation will ebb anytime soon. The genre has proven remarkably flexible and its evolution has mirrored the changes in filmmaking over the past four decades. While real sharks are in danger of extinction, killer shark movies are here to stay.

Sounds of Cinema is a public radio show airing Sundays in Minnesota and featuring film music, reviews, interviews, and other movie related commentary.

Auditions for The Fountaineers KMSU Radio Drama Troupe's production of Plan 9 From Outer Space are on 8/21 @ The Arts Center of Saint Peter! All are welcome! Follow link for details: http://bit.ly/3peXKXy

Walt Disney’s total DTC subscribers all in totaled 221.1 million for the company’s fiscal third quarter ended in June. That was a big beat for Disney+ and its parent, and also marked th...
View on Facebook
· Share

Remember that you can stream the two most recent episodes of Sounds of Cinema at KMSU at Minnesota State Mankato's website. ... See MoreSee Less